my life in a suitcase 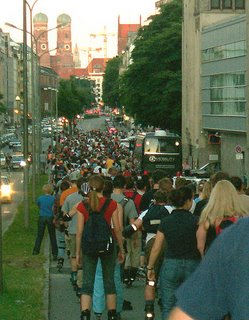 Monday morning. I have so much stuff I can barely ride my bike to the train station, the bike basket is brimming with sporting equipment and corporate attire. The plan: to work. Then, to Artur at work to leave my mounds of stuff with him. Then, to yoga class. Then, to blade night. Then, to Arturs, then job interview at 10am, then press action at 1pm in Marienplatz: soccer game between the renewable energies and the radioactive elements. It's just another day in the life...

Yoga class! A challenge for my german anatomy knowledge. Blade night! A marvel.

15,000 Münchners, rollerblading 15 km through the city, streets blocked off to car traffic, and I work at the group that runs the thing! We float by cafes, roll down Leopolstraße, can smell roasting Hops from the various breweries, and have to watch out for the tram tracks. I love this city.

A perfect prelude to my job interview in the morning—a gateway to stay! Job interview! Fantastic. I am basically hired, and can start right away teaching a sort of test course after I get trained. I can earn a bit of money right away and see if I like it enough to do it full time when I come back in September. Plus, I have two more interviews on Friday. 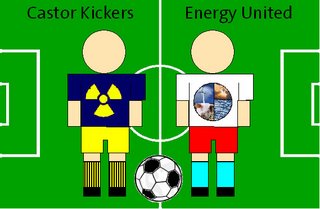 Marienplatz! Where the glockenspiel is...if you know anything about munich this is probably what you picture, if it's not beer and lederhosen. I helped the work colleagues carry the various protest items, and then took the train there—a sunny, spectacular day. Artur was already there, in the line of regally yellow rikshahs...that's right, I am dating a rikshah driver =) Could my life get any better?He took me on a short ride around the center, and then feeling already pretty cool, I headed to the protest. To commemorate the 20th anniversary of the Chernobyl disaster, we did a „soccer game" between the „renewable energy" and „nuclear power". Needless to say, the renewables won and it was fun to sit in marienplatz for two hours and watch soccer players from my office goof around

Posted by Wedding Diplomat at 4:08 PM