A trip to the Bakery 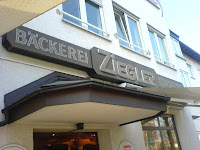 It smells like bread, and flour is floating through the air. It can’t be anything else but a bakery. And that it is: Bäckerei Ziegler, and Herr Ziegler is leading us through the labyrinth of bread and Brezel baking. Each child has a baker’s hat on, and we’re all ready to be taken on a journey of delicious discovery.

Our first stop is the giant mixer. Herr Ziegler types a few keys and the computer communicates with the main flour storage unit, delivering us five kilos of flour within a few seconds. All the children wow as the flour is poured through a transparent tube into an oversized mixing bowl. This bowl travels to the next station, where the fluid ingredients are added to the flour, salt and yeast. Everything is kneaded with a giant dough hook. Then the finished dough gets fed into a dough cutting machine, w 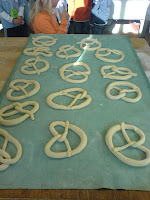 hich divides it into equal portions and then feeds it into, as the kids call it, “a snake rolling machine.” These snakes are normally thrown into Bretzel shapes by professionals, but today we are on the job.

Every child gets a dough snake. Everyone thinks about the story that Herr Ziegler told us about the slave who bought his freedom by creating a baked good through which one could see three sun, a seemingly impossible task made easy by the Bretzel’s three “windows. And we begin to cross and twist. Finally, we’ve completed 18 beautiful Bretzen which go through a Lauge
waterfall before being shoved into a hot oven.

In the meantime we visit the Sußgebäck division, and watch as a giant roller transforms a lump of dough into a 20 meter long sheet. This sheet is then cut into triangles by another machine and fed into a “croissant roller” which twists the triangles into perfect uniform horns. The chocolate ones have to be made by hand, explains Ziegler, as he hands out thin pieces of chocolate intended for the croissants to the children. 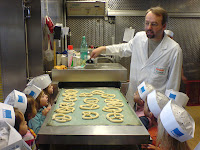 ke our way downstairs to retrieve our Bretzen from the oven. They look golden brown and perfect, and steaming fresh from the oven. Bäcker Ziegler gives each child a handmade Brezn’ and a drink and sends him on his way, but I stop. I’ve just had another one of those intercultural moments, and I thank him for his kindness. Now I know just how another traditional Bavarian food is made!

Posted by Wedding Diplomat at 10:33 PM

I'm totally jealous you've got to visit a bakery. Oh to be a kid again...then the fresh bread is eye level!

Not sure when the next official expat exclusive meetup will be... however, tentatively there is a Grill party (weather permitting) in the works. Native and Ferners are welcome. It'll be on the Flaucher (Isar riverbank) this Friday. Give me PM if you're interested.

That's a lovely story - a wonderful experience! Thank you!