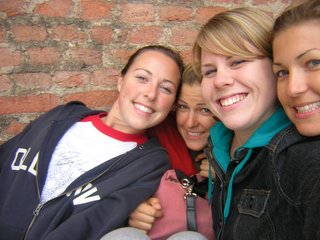 I had some recent visitors! Nicole, Natalie and Corey (their friend) came to see me! We had a fantastic time together, fabulous weather and it gave me the opportunity to get to know the city even better and the excuse to go to Hofbrauhaus as a tourist. Best of all, we sang endless karaoke on tuesday night. Not only did we sing several times (total eclipse of the heart and eye of the tiger are highlights) but we also got sung to by a 65 year old man named Bernie with a wonderful voice. It was like being serenaded by Sinatra...sort of. Needless to say, i'll be going back, maybe every tuesday! I can see it now...Unterwasserhockey, student film club, Karaoke! Good plan, i'd say.

Otherwise, things here are really getting rolling. I've had to cross a series of rather difficult hurdles, well i should stay i'm rather still crossing them. They seem like small things but i'm pretty proud of myself for making it through, just considering that everything becomes so much harder in another culture in another language. The toughest thing had been preparing for the oral presenation that i'm giving in my class on monday! eeeeeeek. Not only is it 15 minutes of speaking German but the material is quite complicated. Luckily my group is fantastic, smart and patient, and we've worked dedicatedly on our presenation all week. Frankly, i've never seen such efficient or smart group work being done...i've learned a lot, including a lot of German, I'm still quite nervous, but Monday's halloween so if i make it through i've earned myself a night out (in costume!), bragging rights, and possibly two new German frie

nds!
Otherwise, little things have occupied me, namely figuring out the city, buying some guys' spot in a yoga course, playing more unterwasserhockey (it's going very well!) and generally enjoying living in what i'm discovering is a fantastic and varied city. My German makes leaps all the time..if sporatically. The next step: internship search. Wow...
Posted by Wedding Diplomat at 12:00 AM