Last weekend, we took Charlie to the zoo. We've done this a couple of times already. The first time, he was 6 months old and he slept through the entire thing in his stroller. The last time, we were with the in-laws and we had fun but Charlie was not really into the animals, he really just wanted to pick up rocks and splash in puddles (and at the petting zoo he wanted to pick up and eat the goat poo. Because yes. We prevented this, thankfully). 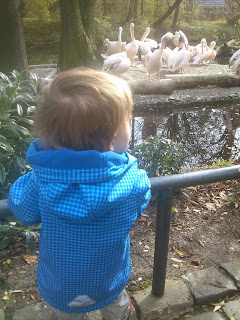 But this time, THIS TIME, he was so into it. It helped that we took the "correct" route which means not the one that goes by the gazillion intresting animal habitats but the one that leads DIRECTLY to the petting zoo with goats (because, you know, we can't see GOATS anywhere else for 12 Euros a person) and then passes a couple of cool animals before a fantastic PLAYGROUND that also sells coffee and pizza (see: happy parents equal happy child) and then continues on to the FARM ANIMALS area with rabbits and horses and even a guinea pig habitat with a little maypole and other fake tiny bavarian village accoutrements. 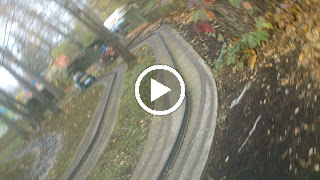 This area also has rides, which are cheap and awesome. We took Charlie on the vintage car ride (we rode with him, each of us once, a particularly harrowing experience at Oktoberfest this year taught us to never let him ride a ride alone again. Ever.) We then continued past a few more animals (Charlie could have watched the alpacas and the pigs for ages. He was most impressed that the pigs had a ball. Whenever we talk about those zoo pigs, he makes his snorting pig sound and says "dall!" (charlish for ball).

What comes next at the zoo is the things about Germany that I will always always love and will never understand why more countries don't do things this way. Because, there is, of course, a Biergarten. And not some overly priced hokey zoo Biergarten but a real, authentic, sprawling Bavarian Biergarten where you are, as tradition dictates, allowed to bring your own food as long as you purchase beverages. And the best part, past the delicious beer, is the beautiful and sprawling playground right next to said Biergarten. Happiness for all involved.

After going down the slide of happiness  (as I think Charlie would have named this metal tunnel slide that had him shrieking with joy time after time) we proceeded out past the penguins and the sea otters, and headed home. PERFECT.

So if you are in Munich, and even if you don't have kids. GO. TO. THE. ZOO. (and follow that sign to the Biergarten).
Posted by Unknown at 3:18 PM