What's going on around here?

Well, Our Charlie is almost 6 months old, it's summer, we have started solids and lots more. Here's a summary and I bit (ha!) about Charlie's schedule (if it can be called that).

I have been meeting up with the women from my birth prep course. Multiple babies of the same age on a blanket? PRICELESS! 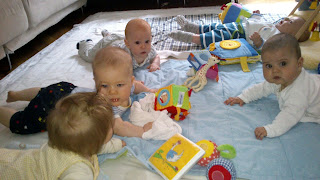 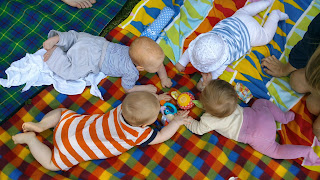 Charlie is super fun. We crack up with him every day. Also, he is eating solids - both purees and finger food at the table with us - and making a giant mess. Hilarious. 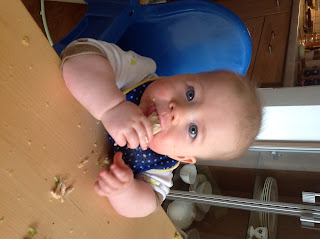 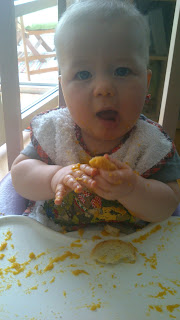 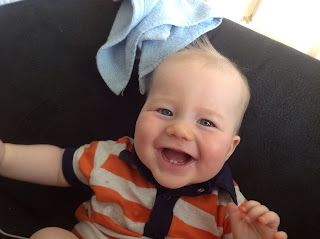 What else is new? Well, I love our "routine" if it can even be called that. It consists of waking up between 4-6am to feed Charlie, then waking again at 8 to feed again and hoping (and praying) that he goes back to sleep. Which he usually doesn't, so we put him in bed between us and take turns hitting the "snooze button" i.e. sticking in the pacifier, waving a blanket, giving him a toy until one of us can't take the screeching and gets up. This is usually by 9:30. Then I/Artur go shower, switching off with Charlie, and then I try to get the house back in order (we do not clean up in the evenings. Evenings are for hanging out) while Charlie plays (or screeches...). Charlie goes down for a nap around 10:30 so I finish the cleaning and do daily chores while he sleeps, and when he wakes up we head out for errands (also to give Artur a break from all the screeching.)  When we come back it is usually lunchtime so I prep Charlie's food and feed him and then Artur stops working for lunch so he takes Charlie while I prep our lunch. We eat together at the table with Charlie, who gets finger food bits of what we are eating.

After lunch I clean up the (disaster!) mess from lunch and putz around, playing with Charlie and nursing him depending on needs. He goes down for another nap around 1-2 so we do that, and then I take advantage of the nap to either get to-dos done (computer/job application stuff or housework) or I nap with him (my FAVORITE!) He wakes up around 2-3 (if I nap with him, he sleeps longer) and we head out for our daily activity - sometimes we meet friends at the park or we go shopping or for a long walk - depends on our mood!

When we get back (around 5-6 pm) we prep dinner (if possible) or just play and hang out and try to bug Artur into stopping with his work. He usually stops around 7, Charlie and I usually bide the time with feeding (he gets fruit and grain puree in the afternoon) and playing, but Charlie goes down for his evening nap around 6-7 but it's unpredictable so if we're lucky it coincides with my dinner prep but not always. Sometimes he skips the nap altogether and we just invite him to eat with us at the table and bedtime is early. If not then we eat together (depending) and he goes down around 9pm.

After 9 the two of us either cuddle up on the sofa or disappear into separate virtual worlds on our various devices. It sounds cold but it's really lovely and kind of romantic. And super relaxing. Wine or beer is always in the mix, since the next nursing isn't until at least 4am. Ah.
Posted by Unknown at 11:54 PM