my dream, to run down an airport runway with my arms stretched out like an airplane, just like Xavier in the final scene of L'Auberge Espagnole. Tonight I watched that movie for the 1000th time with James, my neighbor here in Feldafing (fellow american PPPler). It's still a fantastic movie. 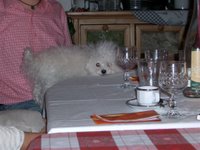 socialites and one ridiculous looking dog that my host mom (when the owner was gone) later called an "Ofenrohrputzburste" (basically, a chimney sweep). See photo.

The gathering itself was a bit long and the guests were nice but had some very interesting and adament attitudes about America that I expended a lot of energy fighting back. In general it was a nice evening, and then when they all left I sat around with James, my host mom and my host dad joking laughing and drinking wine. Compared with the guests of the evening, my host family is so laid-back and hilarious, it's wonderful.

Tomorrow we'll probably have a late Sunday breakfast and then I may be meeting a friend in town in the evening, but other than that my day is relatively unplanned. Things are slowly winding down, people are driving off to home--I still have some floppy loose ends, including the questions "where am I going (if anywhere) during my little winter break here?" and "what's my praktikum gonna be?" I have two more interviews on monday and one on wednesday, all of which sound promising and exciting, so I should have the answer to at least that second question fairly soon. As for traveling, i'm considering three options: 1) Visit my friend Juliette in Bordeaux, France 2) Go back to Padova and maybe explore some of Sudtirol 3) Do north Germany. We'll see what I have the time and money for in the end.

It's 3:45am and i'm sitting on the steps to the basement (where my room is) because I don't get a wireless signal down there. I've decided that it is so very often that I go to sleep at 4, 5, 6 or 7 that I'm basically on American time anyways. Some parts of home never leave...
Posted by Wedding Diplomat at 3:28 AM