The World on a Wednesday (erm...friday) 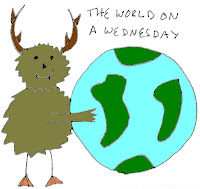 Sorry folks, studying for exams has set me back a bit with my posting. Nevertheless, I present you with (ehem, two days late), the second annual "world on a wednesday"

Today, I have two joyously absurd stories which are making headlines in the German papers.
The first is an announcement that will have Cello players and Yo Yo Ma admirers everywhere breathing a sigh of relief: the "cello hoden" syndrome is a farce! there's no such thing!

The British Medical Journal printed a letter from two readers meant as a joke--but they missed the humor and took it to be a serious medical condition. The joke was prompted by an earlier article about the "Gittaren Nippel" condition in which guitar players experience "irritation" on the most "sensitive" area of their chest because of "friction" from the instrument. The joking letter writers insisted on the existance of another condition affecting Cello player's "sensitive areas"...erm... lower.
Needless to say, many terrified Cello players can now relax and continue their musical passion without worrying about its effects on...erm.. you know.
The next article features a giant bronze shoe. In Iraq. Yes indeed, a private foundation has erected a memorial to commemorate "the shoe incident", in which an angry Iraqi reporter threw a shoe at Bush during a press conference. Apparently, the shoe throwing has become somewhat of a "celebrated" symbol for Bush hating. The turkish producer of the exact shoe thrown at Bush (Baydan, Model 271) is planning on producing a special model, and even applying for trademark rights for the name "Bush Shoe". 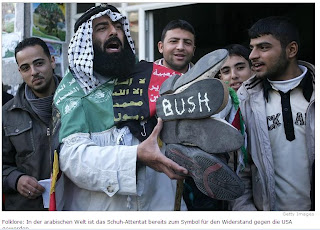 All in all, shoes and cellos... it was a pretty eventfull week. Hopefully the cold and grey weather in Munich won't dampen our spirits. Now, back to work!

Posted by Wedding Diplomat at 12:58 PM