Another entry in the Real German Cuisine Challenge being run by Christina from Amiexpat!
I was really scared of this one. Dough. Filling. Baking. Ayayay!
Get the recipe here: Apfelstrudel
But, it was alright. Messy, but not as messy as Käsespätzle. 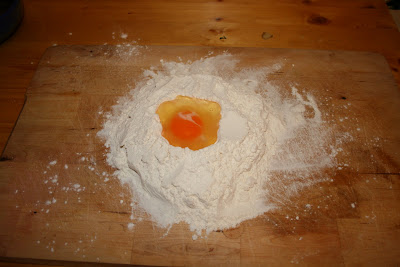 I started by making the dough, which consisted of piling 250 grams of flour on a board, putting a cracked egg and some oil into the middle, and kneading. And kneading. Well, what I got was sticky hands and very crumbly dough. I'm starting to believe that this cookbook is from a time where chickens laid much larger eggs. Or 250 grams weighed less. Or gravity was different. Anyways, I had to add water to even make it "smooth" like it was supposed to be before adding the water, but after that addition it seemed to be a fairly happy dough. 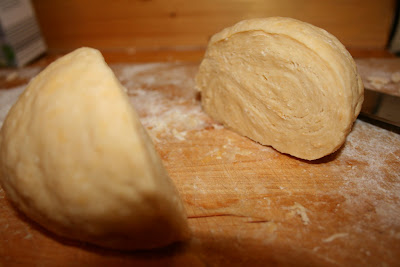 are those wavy lines?

I painted it with olive oil (I didn't have any vegetable oil) and put it to "rise" under a "warmed" bowl (my warmed bowl was plastic run under hot water… and I am wondering how it was supposed to rise without any yeast. Maybe it was just supposed to rest..) 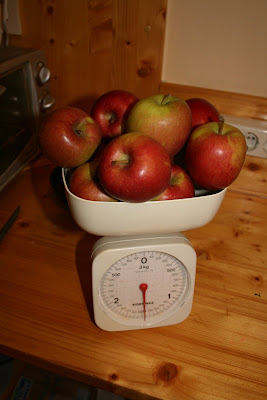 Then, the apple marathon began. 1.5 kilos of apples. That's 3.3 pounds of apples. That's a lot of peeling. A lot of coring. A lot of chopping. But I have to say, I am so very proud of my very best European kitchen skill: the ability to peel fruits and vegetables in my hand with a paring knife in one long glorious spiral of skin.
This pride and glory got me through the first kilo or so. Afterwards, it was pretty boring. But I made it. The apples got mixed with the spices and then lemon rind and juice, and then came the fun part… rolling out my "risen" (or rather just well rested) dough. 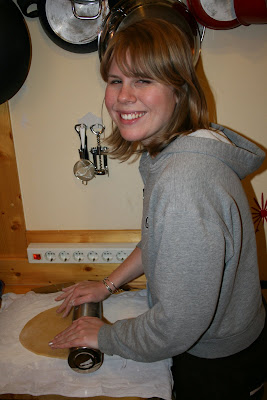 Without a rolling pin. I just don't have one. But my 1 liter thermos which I use regularly for my homemade teas worked just fine. I spread the dough with sour cream and heaped the apple mixture and the plumped raisins on top of it. Oh so many apples and raisins. Then I brought the edges together (a bit of water helped them stick) and, as the directions indicated, "BOLDLY" flipped my strudel. 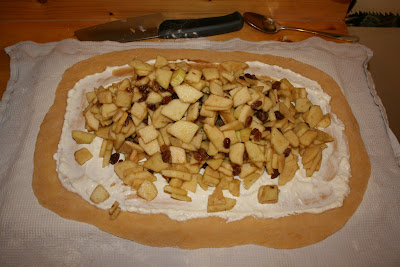 Then I read the next step "place in a U form into the pan). Hmmmmm. I think my kitchen counters would have to be longer to make a strudel that would by able to form a U. Mine was more like a… like an I! Or a #1! (or an elongated blob...)
Anyways, after brushing it with butter and pouring milk overtop, into the over it went. For an hour. Getting a quick breather with periodic bastings. I also made the Vanilla sauce. But I skipped the beaten egg white step. No mixer, no egg whites (too much work for me…). The sauce tasted delicious but was very liquidy. 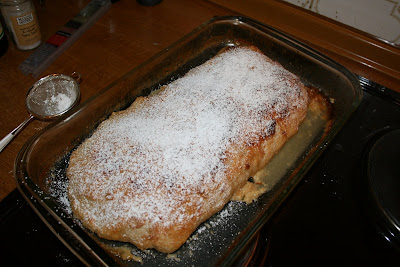 All in all a HUGE success. I brought what Artur and I didn't eat for dinner (that's right, apflestrudel for dinner)… to work, where it was promptly gobbled up and I was serenaded with stories of various regional versions of apple strudel from my German colleagues. 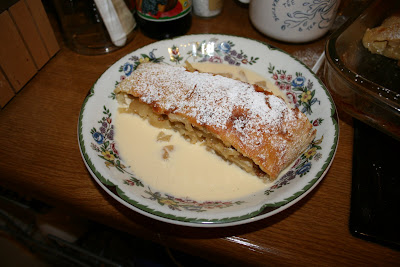 All I have left to say is "Raindrops on roses and whiskers on kittens…"
Posted by Wedding Diplomat at 5:11 PM

Looks good! We had it for Kaffee & Kuchen, but it was so filling, we didn't have dinner afterwards, and I was so busy making it, I didn't eat lunch beforehand, so it was my only warm meal of the day.

great job! I was just as intimidated, then realized that it wasn't hard, just had to put in the time!

A brave undertaking! :) I don't have a rolling pin either (we simply could not afford to ship our whole lives over here, so it's in a box in the US somewhere...) which is one of the many reasons I didn't even try the recipe this week. Go you!

@ christina: it really is a meal!

@stephanie... you're absolutely right! it's a big time investment...but what better to do on a sunday afternoon?

Yummy! Apfelstrudel for dinner! My son would have LOVED that. Your log looks great! I LOVED this recipe.

ahhh... Strudel for dinner brings back memories. My grandmother (100% Bavarian) would make strudel every Friday for her meatless Friday Catholic obligation... Even though that rule was dropped back in the 60s she still kept it old school!