Real German Cuisine Challenge—Käsespätzle (or: the attack of the killer slugs)

I want to say right off the bat: this recipe was really funny. Hilarious. And it made a giant mess. Get this hilarious messy recipe made as part of the Real German Cuisine Challenge here.
I didn't have a spätzle press, so after mixing up the dough, browning the onions and boiling the water, I had quite a time of "spätzlehobeln" as I clumsily tried to use my knife to scrape delicate portions of the dough into the water. 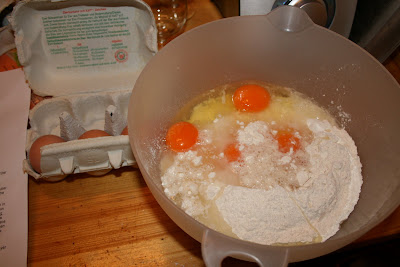 What I got, instead, were giant spätzle blobs. They kind of looked like big slugs. Not very appetizing. I thought it was rather hilarious, though. 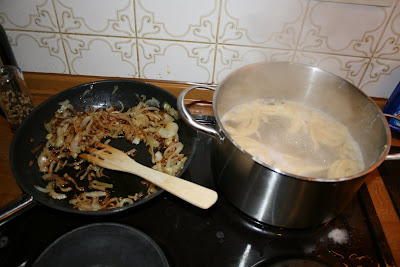 I also had problems with the dough. The amount of water called for didn't even absorb the flour, so I had to keep adding until it had any reasonable consistency. Then, it was very sticky. I basically developed the technique of running my knife under water after every third spätzle to keep them from sticking. 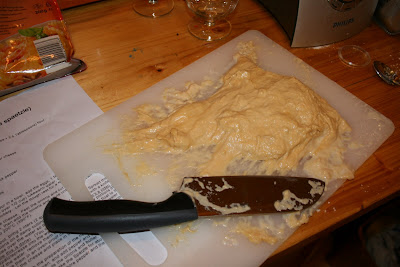 I got better though, and as the layers formed in the pan, they started looking more and more like the spätzle I know. Last but not least I topped everything with the onions and extra cheese, and the final creation was yummy. But the smaller noodles were definitely better. 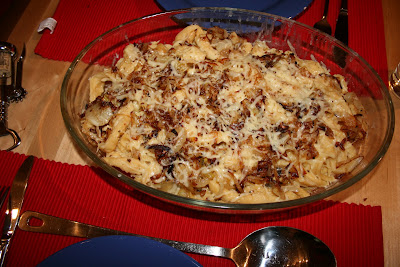 Lessons learned:
GET A SPÄTZLE PRESS!
Onions browned in butter taste DELICIOUS and i'm sure they would spruce up any dish
Giant Spätzle slugs are also yummy... a bit tough, with a "robust" quality
This dish can be reheated. Reheated. And reheated. And gets better every time.
German food is hard. Schwabian women are amazing.

I'm kind of scared for Apfel Strudel. But a wise woman once sang: cream colored posies and crisp apple strudel...when the dog bites, when the bee stings... i simply remember my favorite things. And then I don't feel soooooo baaaaaaaaaaaddddddddd! (sorry. gotta love sound of music. why else do you think i moved here? found out too late that it's austria...)

PS: I really enjoyed reading my fellow challenger's recipes! Thanks especially to Christine and Yelli!
Posted by Wedding Diplomat at 1:23 PM

"GET A SPÄTZLE PRESS!"

Great minds think alike! :) The comments on my blog told me to make sure we clean it right away just in case you do get one... (I hate cleaning after consuming deliciousness)

LOL! Glad you enjoyed your slugs... I mean SPÄTZLE! (mine kind of looked like that too) :)

@yelli haha. hooray for spätzle slugs. Down with cleaning after eating :) I'll have to buy one that's dishwasher safe...

Do you have a recipe for real Schwabian maltashen(sp?)soup? I couldn't get enough of it when I visited Schwabisch Gmund on business.