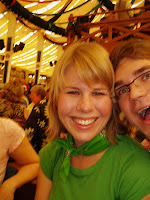 According to Wikipedia, a Wolpertinger is an "(A)nimal supposedly living in the alpine forests of Bavaria in Germany. It has body parts of various animals — generally wings, antlers and fangs, all attached to the body of a small mammal."

So what does that make me? An American girl with a minor in Italian language, Irish, German and Welsh ancestors living with a Polish boyfriend in the "most Northern city in Italy," or "the world-city with a heart"--Munich, Germany. Sounds pretty Wolpertingery to me. 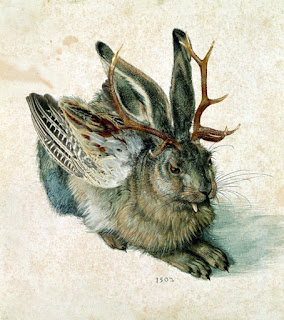 And that's what it's all about, living abroad. Giving up pieces of myself, switching them for others, so I sort of fit in everywhere and then again nowhere. A freak of nature, the stuff of fantasy. Ok, it sounds a bit self important. But then again, blogs aren't there for self importance, than what is?
To follow are the tales of my adventures as a culturally-mish-mashed expat. Enjoy!
Posted by Wedding Diplomat at 2:21 PM