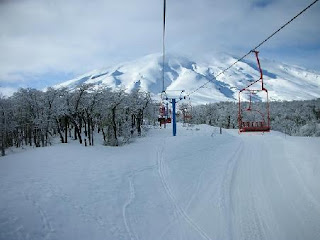 In America, there's the house show. You know, that show on sundays that just shows houses for sale: no video, just pictures of the houses and the asking price. Watching the show is soothing, it requires no brain power, it's so elementally boring that it's like automatic meditation: you aren't thinking anything.

In Germany, there's the mountain show. Intended to provide skiiers with a view of the current weather conditions in each ski area, this program flips from one mountaintop to another, broadcasting images recorded by some tiny camera mounted, in most cases it appears, high up in some snow covered tree. This show is even better than the house show, not only because the images sometimes rotate to show the full panorama and because the video is live, but also because more than often all there is to see is white because, well--it's snowing. Sometimes there are droplets on the camera, sometimes the blustering snow lets up for long enough to identify the tree a few meters away from the camera--the only way to identify these places is by the logo in the lower righthand corner.

As if this wasn't already enough to beat the house show, the whole thing is accompanied by a background of traditional bavarian and austrian "Blasmusik" Fantastic. Of course, on a beautiful day the mountaintops look gleaming white and I cuddle up under my blanket on the couch and think to myself "this is so much better than real estate."
Posted by Wedding Diplomat at 7:49 PM