Bremen—the traveling musicians and other tales from the North 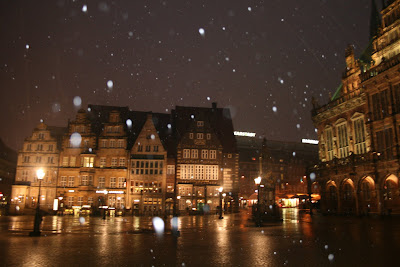 My Valentine's day present came early this year. At 3am. When I asked Artur, in the midst of our party on friday evening, how long I could sleep in. He answered:

"mmm..hmmm… it would be better not to sleep at all"

we packed, cleaned up the remnants of our party, threw out our guests and headed for the train station to hop an ICE at 6:50 am. Destination: Bremen.

The Hansastadt, the home of the traveling musicians, and almost on the North sea! I was thrilled as I drifted off to the gentle 220kph swaying of the ICE. When I awoke what seemed like hours later, I was awed by the scenery outside my window.

And then, the train announcer: In a few minutes, we will be reaching Würzburg.."

Oh, MAN! Still in Bavaria. Maybe I need to get out of Munich more often if Northern Bavaria already seems so different to me. 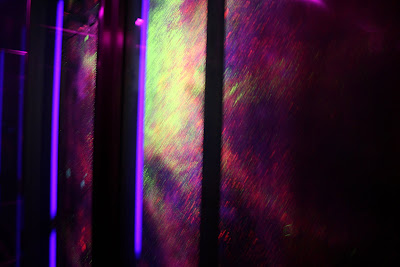 We dozed the rest of the way and checked into our space themed hotel after many mishaps with the Bremen tram system and fighting our way through the screaming chanting Werner Bremen fans. And when I say space themed, I MEAN space themed. There was a Saturn painted behind the reception, our room was curiously outfitted with early 90 style slanty metal, blue and yellow furniture. Even the elevator was lit with blacklights which illuminated a Disney world style planet and star mural on the shaft walls. Freaky. But despite the theme, it was a rather sterile business hotel, very nice, with the best feature being: the FREE minibar. That's right. Of course, there were only two beers, a coke, a water and an orange juice. But you better bet we took everything with us when we left. Along with the shampoo, soap and shower caps. I considered taking the slanted chair… 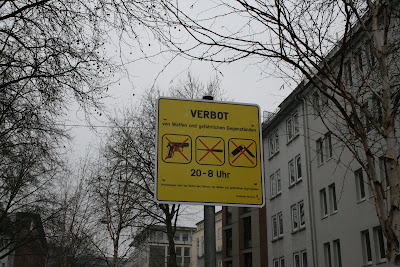 this sign says "weapons and dangerous objections forbidden between the hours of 8pm-8am
Bremen itself was charming. The Rathhaus and the Dom were the most beautiful buildings, and I fell in love with the surrogate city symbol, the Bremner Musikannten. 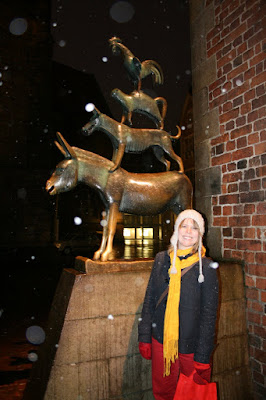 me in front of the "Bremerstadtmusikanten"

We spent Valentine's evening in a cute little corridor of clubs and restaurants where we drank two amazingly giant 4 euro cocktails and ate Mexican food, which for German standards was pretty good. I actually was hoping for fish, since we were so close to the north sea, but by the time evening rolled around we were so beat that we didn't have the energy to walk too long to find a place. The down blankets in the hotel were the best part of the day. 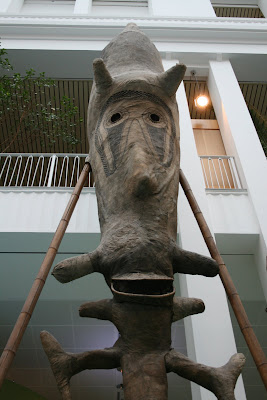 In the morning we ate breakfast and braved the snowy gray weather into the city towards the giant and fascinating "Übersee" museum. You know how some museums manage, with a little effort, to make the most benign displays fascinating? This was one. We actually spent hours reading the descriptions of various plants, animals and customs from all over the world and examining the collections brough back from the first German colonists. Did you know that residents of many tropical countries weave themselves "sleeping bags" out of straw to keep out the mosquitos. Great idea!

Afterwards, we had time for our last two missions: take a picture in front of the Bremner Musikanten sculpture, and eat Pommdöner. The first was accomplished in a flash, the second was a bit harder. We had seen a sign for this wonderful Döner creation on saturday, and were now determined to feast on it for dinner. A cone of french-fries topped with pieces of döner. Could it get any better? This had to be a Bremen specialty, as we have never seen this in munich. After three tries, we hit the jackpot. 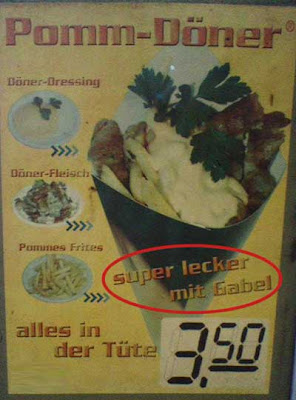 All in all a wonderful romantic surprise and a fun Ausflug. We would do it again anytime and take this moment to remind all those other Expats out there to get out and explore Germany!
Posted by Wedding Diplomat at 11:48 PM

This post makes me realize how old I am - the skipping sleep for a 6:50 train is something that no longer seems appealing. Plus, the baby would definitely be annoyed.

I think the litmus test for being old is when you realize that you never want to stay in a hostel.

Hey, was the Mexican place on the river? (Sort of...on that street of restaurants that's along the river?) Maybe it's the same place we all ate at the expat meetup!
Bremen is great!

Tammy, what about all the families and old people in the German hostels (the ones in that network)? Forever young? :)

haha, @tammy b: I have to admit, i am pretty much not prepared to stay in a hostel anymore either. At least not with my boyfriend...

@CN Heidelberg: The mexican place was in a sorta weird alley-club mecca called "auf den häfen" (i think) But Bremen was beautiful...