Those Münchner love their Wies'n (the Munich resident's term for Oktoberfest, because it takes place on "Theresienwiese" or "Theresa's Meadow") There's no sadder moment for many than the second weekend in October, when it's all over. Now here we are, in the middle of Fasching, only four months after the Dirndl and Lederhosen Hochburg is over and the city is talking about it again. Because, the new logo was announced, unveiled on February 5th at the Stadtmuseum. And it's a giant pretzel. But not just any giant pretzel: it is completely devoid of salt or that lovely golden pretzel color, and there are no dancing Dirndlmädels or Stout Burschen in sight. It's a modern word pretzel. A feat of bakery, a neon parade of words twisted into that oh so famous shape. Oktoberfest 2009 meet Las Vegas. 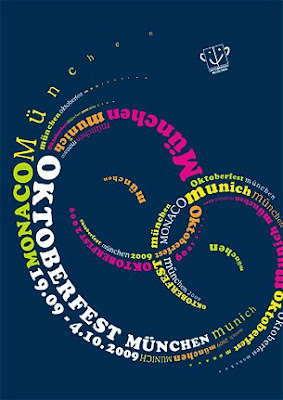 courtesy of Muenchen.de
I, personally, am not a fan. Oktoberfest isn't something modern! It isn't "hip" or "innovative" or "sleek". It's old and dusty and traditional, boisterous and loud and heavy with customs and family heirs. It's a wonderful stereotyped thing that should continue to embrace its own kitschy yet authentic heritage. I liked, for example, the slightly modern take on the traditional in 2006: 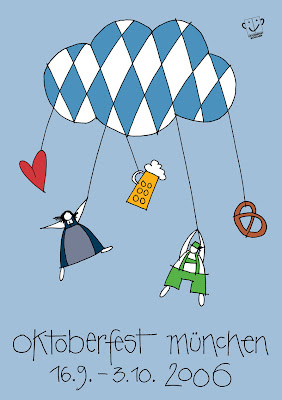 And, can someone tell me what the deal is with the early 90s color scheme? Who decided that jaggedy neon letters and graffiti like motifs were cool again?! Were they ever? Apparently the 2012 Olympic committee thinks they are…

Bring on the Bretzen, but the baked kind, please!! Anyways, this logo will find a place with all the other Minikrugs to expand my memory collection. Maybe the nostalgia will grow on me…
Posted by Wedding Diplomat at 2:16 PM