Clothespins and Wild Pig Gulasch or: my adventure in cross country skiing in the alps (spitzingsee) 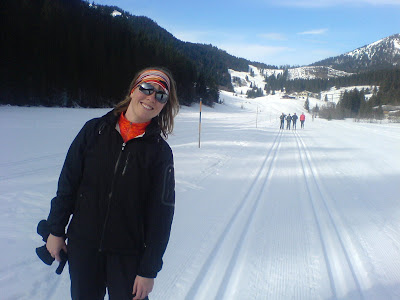 After a long month of studying for finals, it was time for some Erholung in the Alps. I signed up for a cross country skiing course with the Deutsche Alpen Verein and headed off Saturday morning to catch the train with my group. As if to further attest to my American chaotic nature, I managed to miscalculate my ubahn ride and nearly miss the train. Due to my lateness, I couldn't find the group I was supposed to share a ticket with, so I just hopped onto the train and hoped for the best, realizing very quickly that I was in the wrong section and that, since the train splits into three pieces after a short ride, I would have to hope over two sections before that happened if I wanted to get to my destination. I ran like a madwoman to the next section and the first stop, nearly losing my sleeping bag from my hiking pack in the process, praying that the doors wouldn't shut and the train wouldn't drive away before I reached the entrance. After repeating my mad dash at the next stop, I made it into the correct train car – which was oh so apparent due to the many hundreds of skis and snowboards packing the aisles. To make a long story short, I did locate my group (the only ones with the very long cross country skis) and managed to repress my flusteredness all the way to Fischhaus-Neuhasen. 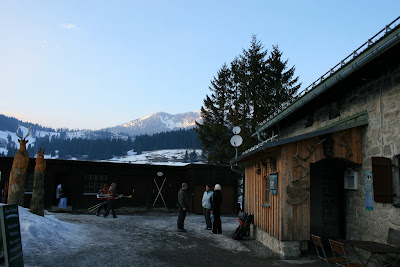 There, we boarded a bus and rode up and up into the mountains until we reached the tiny town of Spitzingkirche. There, I rented my equipment (I was apparently the only non professional who didn't already have grade A equipment with me—something oh-so German) and trekked with the rest of the group 15 minutes down icy roads to the Albert-Link-Hütte, our base for the weekend. What a view. 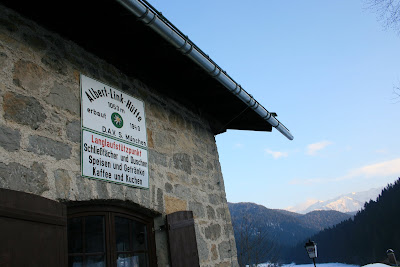 Upon arrival, we changed clothes and met our course leader outside—it was a bit chaotic, given that two other Cross Country Skiing courses, a ski tour course and an Avalanche Survival course were also staying there and getting ready to head out into the snow. Nonetheless, we managed to march down to the practice course together and spent the morning practicing everything from balancing on our skis to correctly shifting our weight. We even played a game where we had to try to pin clothespins on the other members of our group while wearing our skis and tripping over each other and the know. 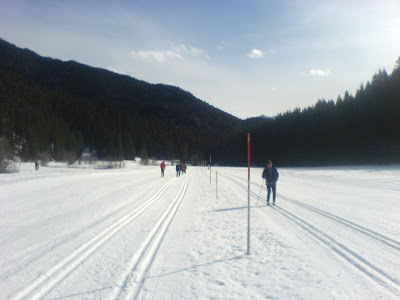 By lunch, we had all the steps together, and we were finally allowed to try the full thing, and before we knew it we were (inching) down the practice track like (non) professionals. But it sure was fun, and the Alpine scenery was spectacular. 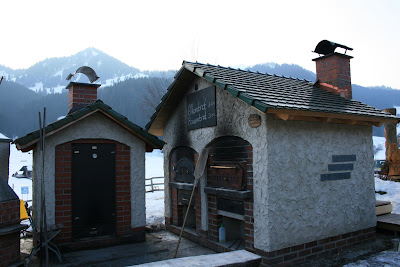 Lunch never tasted better, especially because the menu at the Gasthaus is quite extensive and oh-so-delicious. I ate a gigantic baked potato with Kraüterquark and shared a Kaiserschmarrn for desert. Mmmmmmmmmm. 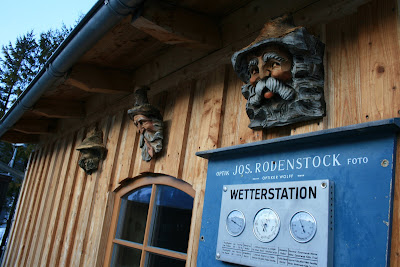 The "weather station" at the hut. And carved wooden faces.

We spent the afternoon working on going downhill and stopping, and when the sun started to set we headed into the Hütte for an evening shower and a delicious meal in the Gaststübe of Wild Pig Gulasch and beer. And nothing tastes better than a beer in a warm cozy room after a day in the winter air. Mmmm. The Wild Pig, it turns out, had been shot by the owner's husband—he wanted to take a weekend to go hunting with his pals, and his wife told him "alright, but only if you bring back something that we can use". It turns out he did, two big bristly somethings, which we devoured in delicious gulasch form with Butterspätzle and Blaukraut. 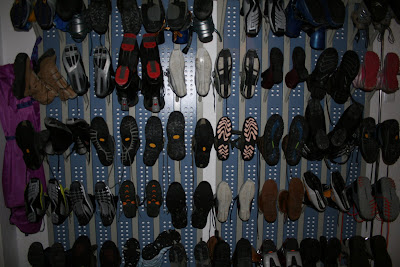 shoe dryer in the hut

After a night of intermittent sleep—I kept waking up dangerously close to the edge of my very high up bunk bed—one look out the window revealed a much winterier landscape. It had blizzarded in the night, and everything was white white white. I lifted by head from my hay pillow (that's right. It smelled like a giant Chamomile tea bag and was very crunch) and headed down the ladder. OUCH. My calves were quite sore. Very sore. I limped to breakfast but was immediately revived by fresh coffee, boiled eggs, ham and wurstaufschnitt, cheese, yoghurt and delicious bread made in wooden ovens on the premises. Then, we headed out to face the snow. 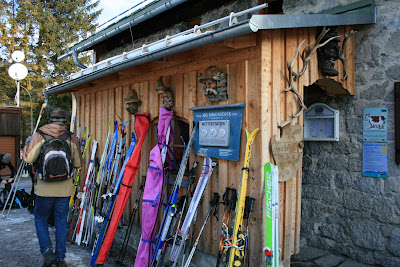 I learned the hard way that rental skis aren't always well taken care of. Since the snow was so wet, it immediately stuck to my well worn skis, despite spraying them with multiple layers of "deicing" spray. I trudged along, hardly gliding, very frustrated, and by lunch I was so exhausted that I could hardly move. But the group convinced me to go out one more time, and our instructor lent me his fancy schmancy skis, so I was in good shape again to enjoy our last jaunt through the snow covered woods. Amazing and beautiful. 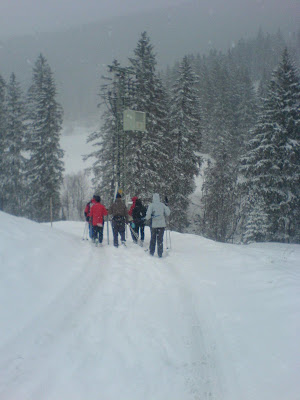 We had to run 15 minutes uphill to catch the bus to the train, and when I finally got home I was completely exhausted but I had enough energy left to unpack my delicious souvenirs: freshly baked wood stove bread, game (hunted) salami and smoked Bergkäse. Dellllliiiiccciiiouuuusss. Anyone interested in joining me for my next cross country ski adventure? 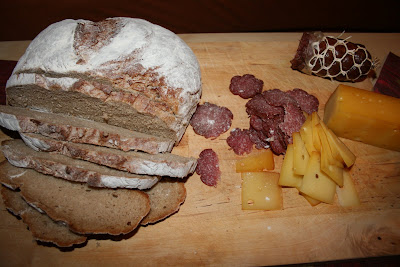 Posted by Wedding Diplomat at 9:19 PM