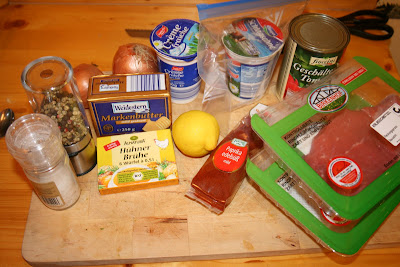 This week, we made "Kalbsrahmgulasch" or Creamy Veal Gulasch. Mmmmm. The recipe can be found HERE

I started out by chopping everything and clariying the butter (heating it and skimming off the "white stuff". I used a handy trick I read somewhere on the internet and used kitchen scissors to chop my tomatoes. Then, I used the scissors to cut up my veal. 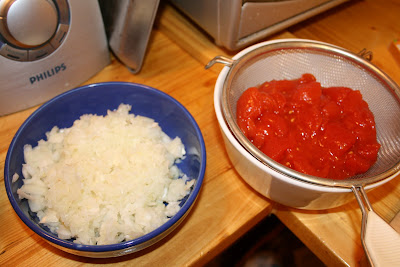 I browned the veal in the clarified butter, added the chopped onions and sprinkled with paprika, and then, finally, topped everything with chicken broth. I used chicken broth instead of the recommended beef broth because a) i am not one of those people who makes their own broth so b) the only one without MSG at the store was the organic instant chicken broth.

Then, everything got to hang out and simmer for a while. When I say a while, i mean an ETERNITY!! Ok, so i am not one of those people who is very patient. I like food that involves a lot of activity and not a lot of waiting. And I didn't start cooking until 8pm. So... instead of letting it all simmer happily for the recommended 45 minutes, i only waited 30... 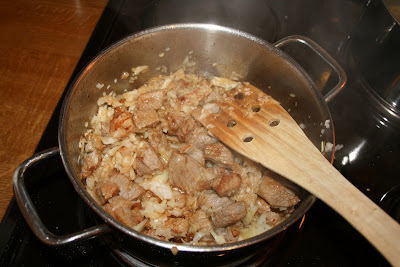 And then added the cream, salt and pepper. Now I had a little adventure with my cream on the way home when it burst in my shopping bag (which i noticed as I was waiting for the ubahn as a white puddle started to form..) but i managed to rescue the dinky german plastic container with a foil lid by slipping into one of my newly purchased ziplops. That's right, call me Ms. Resourceful.

Anyways, I had just enough cream left and, to me, the whole thing looked a little TOO creamy. So I added some tomato paste and some Sriracha sauce. Then I let it cook away, finishing it off with some Crème fraîche (which, indeed, is very cheap in Germany) and lemon zest (i couldn't resist licking the Crème fraîche spoon..yum yum).

In the meantime, I made rice in my rice cooker (basmati, cause that's what i had..) and heated up yesterday's baguette in the toaster oven. Here's the finished product.

DELICIOUS! The only thing I would change would be...my patience. I think the meat really could have used those extra 15 minutes. Next time...

It DID taste like an Indian dish! But in a really cool fusion German way. Yummy yummy. 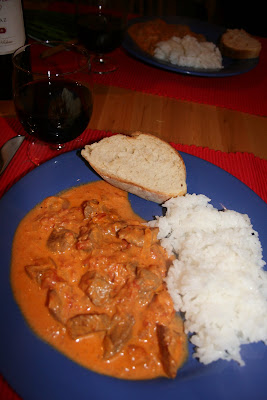 By the way, Christina, thanks so much for starting that. I am having SO much fun(and my boyfriend is too!!!) ! I look forward to every week and can't wait for Kässpatzen!!

After a while, I'll have Artur do a guest blog post and rate my German cooking skills :)

up up and away!
Posted by Wedding Diplomat at 9:35 PM

That's a good tip with the kitchen scissors. I've been meaning to buy myself a pair, but just haven't gotten around to it. And good save on the cream.

@christina yeah, if you buy a pair, make sure they're dishwasher safe! I just chuck mine when i'm finished and they come out squeaky clean!

looks good! this seems like a recipe that is very forgiving to most cooks -
can't wait to see your spaetzle next week!

LOL - Sounds like we both have a patience umm...issue! :)

I am so excited to try your recipe next time I make it. I bet it was delish like that!

BTW: I have always wondered what would happen if something broke while I was using public transportation. I am going to carry ziplocs with me at all times!

@yelli will you be making spaetzle? i'm getting excited... :)

ps: the thing with the ziplocks was a pure stroke of luck, hehe