"Bush is dead"?! and other problems of the press

According to BBC Ex president George Bush is dead. He's not, of course, but apparently one of the technicians for a South African TV station wishes he were: the technician was "testing" the rolling headline system and "accidentally" pushed them button to go online, upon which the headline was on air for about three seconds. He meant to use it as a test phrase. Makes me wonder how often those little headlines running along the bottom of the page are just tech guys fooling around… 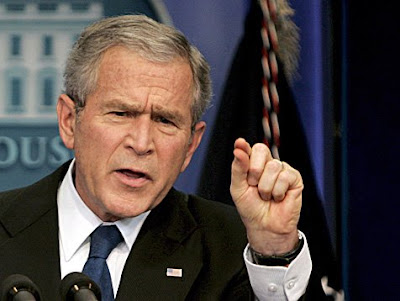 Apparently, the new policy is to now test all headlines is "gobbledygook" language so that the same error doesn't happen. I'll be on the lookout for the next "dsfkljsdkiuwsxcnx,yqweesa asdjsdf" headline post when I'm in South Africa.

This makes me think a lot about newspapers, and the press, and free speech, and bias in news coverage. I find German TV news to be wonderful and German newspapers (with the exception of a few) to be horrendous. Kind of the reverse of the US. I am especially disturbed by the frequent (daily, rather) photos of naked women. What's the deal with that? In my opinion, Bild and the like make our McPaper (USA Today) look like top journalism. As Artur pointed out, one of Bild's favorite tricks is to turn an unsubstantiated fact into a headline by adding a question at the end. Like: "Popcorn Causes Cancer! (is this true? Find out on page 11). I am also quite disturbed by the fact that all three "McPapers" in Germany usually have some form of the same headline. And when all else fails and there isn't any gruesome or scandalous news, there's always the favorite three topics: sex, the weather, and the price of beer. 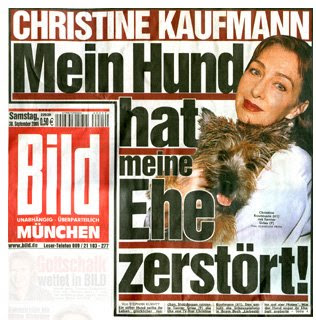 Copy of the "Bildzeitung" claims "My dog ruined my marriage"
What do you think about German news media?
Posted by Wedding Diplomat at 4:23 PM